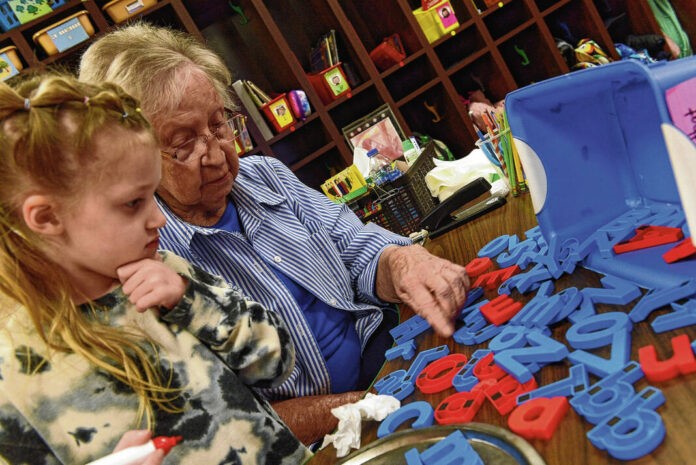 Carol Smith works with Piper Whitis in Mrs. Peel’s kindergarten class. Smith is a “foster grandparent” in the classroom, offering support to students in help with work, reading time and even just being a listening ear.

Each morning at Van Buren Elementary School, students file into their classrooms, greeted by teachers and staff as the day begins.

In Christine Peel’s kindergarten class, Carol Smith also welcomes young learners as they enter the room, just as she has done every school day for nearly 10 years.

She reads with the kids, helps with lessons and listens to their problems.

“Mainly what you would do if you were a grandparent,” she said last week as she sat at a U-shaped table in the classroom with two kindergartners who she said are always at her side.

Smith — known in the classroom as “Grandma Carol” — is a volunteer foster grandparent, and is in Peel’s room every day from about 8 a.m. to noon.

At the beginning of this month — on the first day of school — Smith celebrated her 90th birthday.

Smith was born Jan. 4, 1933 in Cincinnati to Ernest and Henrietta Mathis. She had one brother, Robert, who passed away.

Ernest worked in construction and Henrietta stayed at home. In 1956, Smith married Jack Smith of Kentucky. He passed away in 1995.

Smith retired after 40 years at United States Playing Card Company, where she said she did “just about everything.”

She lived in Cincinnati until 2012 when she moved to Brown County with her kids, she said.

Her daughter, Sandy Smith Richardson, is the board president of Mother’s Cupboard Food Pantry, where her birthday party was held.

Carol Smith dons a sash and crown at a celebration for her 90th birthday earlier this month. Smith volunteers daily at Van Buren Elementary School as a foster grandparent, and said she takes life “one day at a time.” 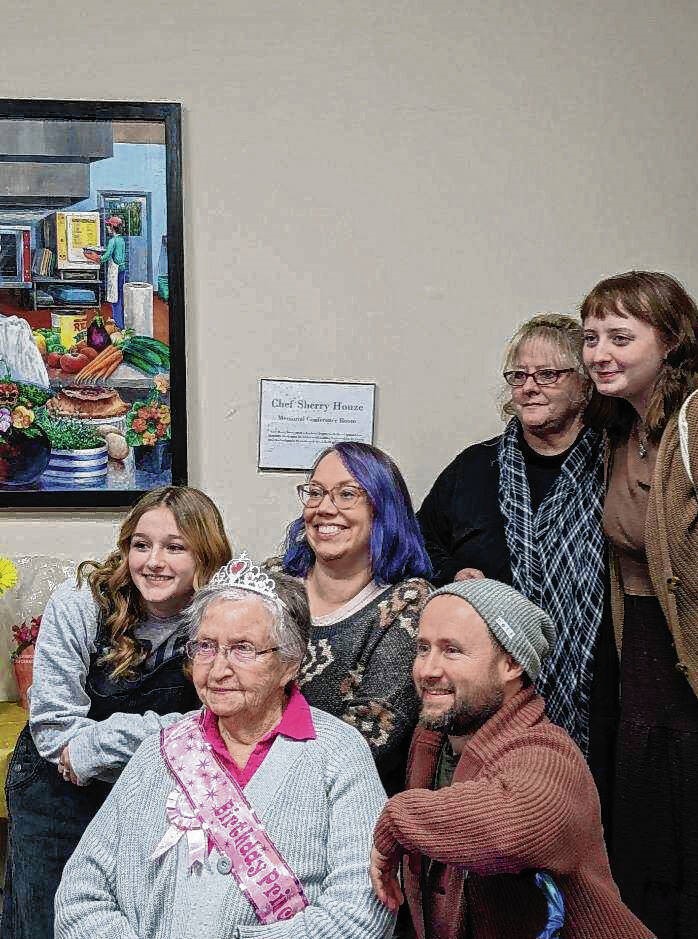 Carol Smith (front) with her family at a celebration for her 90th birthday, which was Jan. 4. Smith volunteers daily at Van Buren Elementary School as a foster grandparent, and said she takes life “one day at a time.”

In her spare time, she crochets.

Even though she turned 90 at the beginning of this month, Smith said she never had really thought about birthdays.

“When you’re born poor, and I never really thought about birthdays,” she said.

“I knew I was another year older but I never dwelled on how old I was. I still don’t, I just do what I can.”

When asked if she had any secrets to a long life, she said that she never really gave it much thought.

One thing she has lived by over the years is to take life one day at a time.

“Never dwell on anything, good or bad. It’s a part of life, just go on and do what you have to do. I take one day at a time.”

Shortly after moving to Brown County, Smith said she got stuck in her apartment one winter after it had snowed. Not being able to get out and do things is not her style, she said.

In the lobby of her apartment building she found a brochure for foster grandparenting, so she decided to volunteer.

“It gives me something to do, I don’t like sitting around,” she said.

“And I love kids, I get really attached to them.”

Kids get attached to her too, she said, and will often remember her if they run into each other out and about town.

Building relationships with students over the years, Smith said she has not only helped and supported them, but heard some sad stories kids share, too.

The first year that Smith volunteered, a little girl in the class came up and asked if Smith had a bow for her hair.

All the other girls had bows, Smith said, and this little girl’s hair was hardly ever combed.

She didn’t have a bow on her at the time, but after that, Smith made sure to keep spare bows and barrettes stuffed in her pocket.

“I got attached to her and knew her circumstances,” she said.

Peel said that she sees Smith as a daily blessing to the classroom.

“From the beginning of the day when we may have those little ones who come in wanting to share some exciting news to those who have had separation anxiety leaving their parents for the first time to come to school, Carol has become another safe and comforting presence,” she said.

“She definitely has a positive impact on the students! They want to sit at her table and share their day’s experiences, which gives them a sense of community.” 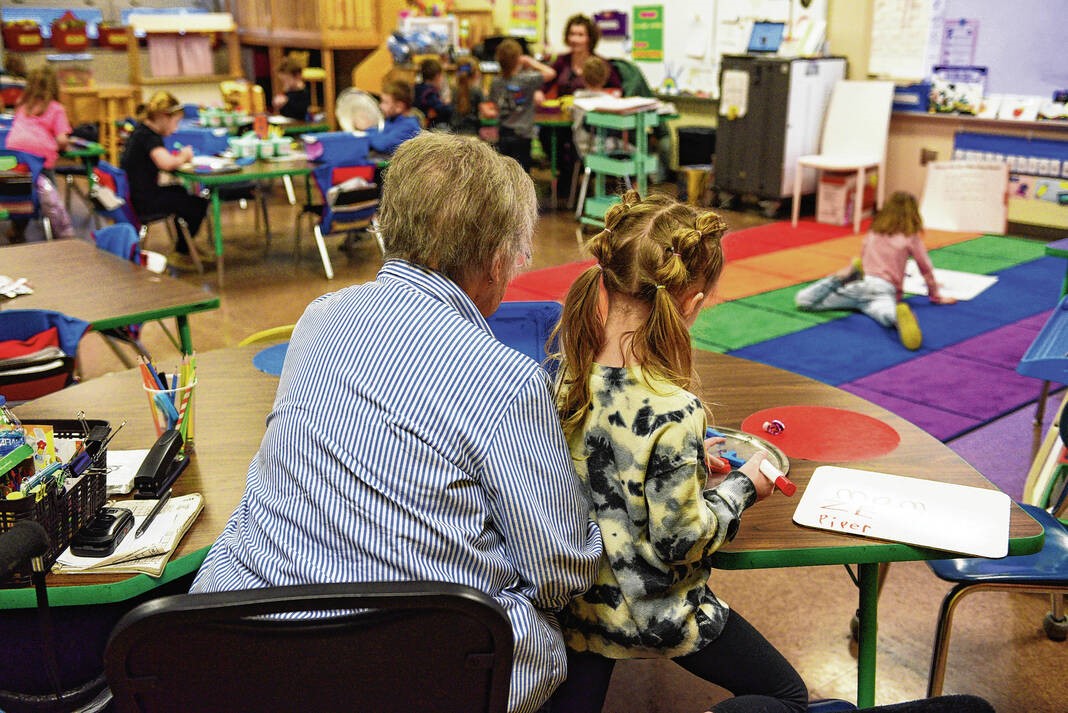 Carol Smith works with Piper Whitis in Mrs. Peel’s kindergarten class. Smith is a “foster grandparent” in the classroom, offering support to students in help with work, reading time and even just being a listening ear. Abigail Youmans | The Democrat

Students are proud to show Smith their work and get her opinion on it, Peel added.

Smith reads with them individually and listens to them read back to her.

“Having her as another example of what it looks like to put reading as a priority makes a big difference, too,” Peel said.

“I think that having a foster grandparent in here gives the children an opportunity to spend time with a different generation and appreciate all that they have to offer.”

Peel said that if the children don’t have a grandma, they get to experience Smith’s gentleness in the classroom, which can have an effect on their behavior, knowing that she reminds them of how to behave.

“She cares for them and they see that. Also, she’s got a good sense of humor so that helps, too,” Peel said.

VBE Principal Greg Pagnard said that Smith has a “wonderful presence about her,” and that she makes kids and adults comfortable.

“She’s a hoot,” he said of Smith, and added that she’s “never not doing something.”

She also brings a different perspective and a great dynamic to the class, he said.

“That’s who we want in a classroom.”

“They’re going to remember these people forever,” he said.

“If they’re like (Smith) we’re not turning anyone away.”

Peel added that she would love for the community to embrace including seniors as much as possible.

“We can glean from their wisdom, respect their knowledge, and learn from their experiences,” she said.

“We should never stop learning from those who have come before us and always make sure to blend generations so they can appreciate and enjoy being friends with all ages.

“It is another part of diversity that we should never overlook. They deserve our respect and admiration for adding so much to our community. Their age is not a hindrance, it’s a bonus since they’re a wealth of knowledge and have so much love to still give.”

Brown County Schools Superintendent Emily Tracy said that having the presence of a foster grandparent is a great experience for our students.

She said that the foster grandparent program used to be a bigger program at Brown County Schools prior to the pandemic. Currently there is just one grandparent at Helmsburg Elementary School and one — Smith — at Van Buren. Another is hopefully starting soon at VBE, Tracy said.

“This is an opportunity for our community members to come in and serve as a mentor or tutor for our students,” Tracy said.

“It not only supports our students, but also provides an opportunity to enrich the lives of the foster grandparent also. Anytime our students get the opportunity to have an additional mentor and role model in our classrooms, it makes a difference for our kids.

“It is another adult there day in and day out to read to them, teach them something new, listen to them and simply love them.”

Smith said has always volunteered in kindergarten classrooms, and laughed as she added that she chose the age group since she’s “smarter than a kindergartner.”

She encouraged those who are able to volunteer to think about joining a classroom as a foster grandparent.

“I think they really should (volunteer), a person should get out of their homes,” she said.